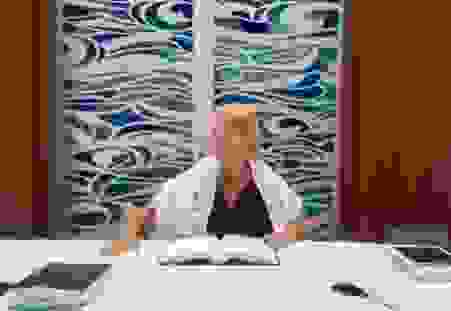 Hazzan (Cantor) Marianne Styles graduated from and was ordained by the Rabbinical and Cantorial Seminary of the Jewish Spiritual Leaders Institute (JSLI) in NYC, and is a member of the Women Cantor's Network. A former native of Philadelphia’s Western suburbs, now residing on Maryland’s Eastern Shore, Cantor Styles has served over the past 20 years as a Hebrew school teacher and music director, service and song leader, and Torah/Haftorah reader. She also served as a “weaver” for the Jewish Women’s Archives Women of Valor project and on the Board and as a facilitator for the Anti-Defamation League’s “No Place for Hate” program

In Person or Remote

Playing for Jewish Heritage night for the Phillies!

After a number of years as lead singer for the popular local “big band” Klezmer Klassics, Cantor Marianne now enjoys performing a range of traditional and modern liturgical music as a solo vocalist/guitarist.

In addition to her religious activities, Cantor Styles serves on the Board of Directors and as a volunteer attorney for the Support Center for Child Advocates, representing abused children in Philadelphia's foster system, and is a graduate of University of Delaware and Delaware Law School.